Can You Improve Morale with Team Building Games?

Being a technical kind of guy, I'm not the biggest fan of team building games. Generally they focus on soft skills like communication and bonding.

And usually they're pretty lame.

Often management is looking for a quick fix to address morale problems. But if morale is poor, a game or two won't improve the situation. Usually there's something deeper simmering.

In a recent episode of Parks and Recreation, the staff go camping as a team building exercise and ostensibly to generate a "next big idea". Naturally, the employees pack their bags full of pessimism and television hilarity ensues.

All that being said, if you have an energized team, working on Lean problems together, there's nothing wrong with breaking up the session with a little team building to get everyone to stretch their legs and minds. 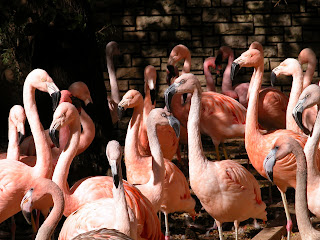 Or you could all just stand around.

In this simple game two people stand in two halves of a circle, with a line in between. Each person has to convince the other to cross the line to their half of the circle, without being physical. The facilitator referees, while the rest of the group adds encouragement. The idea is that they would negotiate to reach some kind of compromise.

The game seems interesting, but I think it has the potential to cause some hurt feelings, if some strong willed people get involved. The facilitator is going to make or break this game. At least it's fast.

In the second game groups have to work together to get a marble to flow along different sizes of PVC pipe without touching them or joining the pipe together. Naturally, there's a certain amount of planning, strategy, trial and error and working together.

Seems better for larger groups, or maybe teams of groups, but requires a bit of prep work. As well, there's more relevance for Lean, since you're working with the "flow" of the marble. I know, it's a stretch.


When any game, be sure to have a decent debrief, with some reflection on how it's relevant to your business. Otherwise, you might as well go and play Xbox.

These games have been added to my huge list of free Lean games.