The Marshmallow Challenge and the PDCA cycle

The Marshmallow Challenge is an interesting team building game. Not only does this silly game teach how to collaborate as a team, but, more importantly, teams that perform well, use an iterative method.

Sound familiar? In lean, small kaizens can lead the way to big changes. PDCA is an iterative process. In software development, releasing successive iterations of products are now the norm. Can anyone say, "Upgrade?" 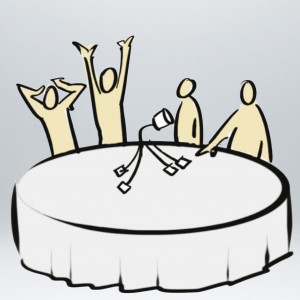 The point of the Marshmallow Game is dead simple. Build a free standing tower out of uncooked spaghetti sticks that will support a single marshmallow. The winning team has the highest tower. And you have only 18 minutes to do it.

Although it's simple, after 18 minutes, you'll have a roomful of vastly different structures. Also, the Marshmallow Challenge is considered an exercise in psychology. Why do some teams have stellar performances, while others fall flat (literally!)?

Tom Wujec from Autodesk explains why, in the embedded video below:

People that think hard about a single plan tend to fill the time working on that single plan. They typically fail as their marshmallow gets popped on top at the end and their structure collapses. Recent business school graduates fall into this category.

People that work with the marshmallow from the beginning and build up gradually, adding pieces and raising their marshmallow gradually end up succeeding most often. Recent kindergarten graduates fall into this category.

Predictably, engineers and architects tend to perform well and lawyers and MBA's perform. . .less well. But a good facilitator will bring any team together. Teams that include an executive assistant almost always perform  the best! A skilled facilitator will bring out everyone's ideas, track the timing and improve overall communication.

Do incentives motivate teams? You betcha! But not always the right way. Unskilled teams will be motivated to perform, but will consistently perform worse! While skilled teams will perform even better with a little motivation. Motivation will highlight the teams skills or lack thereof as they strive for victory.

How will the Marshmallow Challenge help your next lean effort?


The importance of the PDCA process is clearly highlighted by the challenge. It's in our nature to try things until they work, but somehow education has taught us to ignore this. In what other challenge can kindergarten students consistently outperform business school graduates?

Now, I won't be asking my 5 year-old to develop the business plan for my new start-up, but perhaps we have lost some basic skills in our 15+ years of schooling. It's important to plan our lean activities, but at some point we need to DO! Just do part of it and see what happens. Maybe you'll fail a few times. But those small steps move you closer to your goal. You can fail small, instead of a mega-fail. And then when you win, you really win. And that's how you move your business forward.

You can pick up the instructions for the Marshmallow Challenge at marshmallowchallenge.com.

I'll leave you with this exciting video of the final minute of a marshmallow challenge:

Has anyone tried the Marshmallow Challenge? Tell us about it!