The Multitasking Game - Prove Yourself!


Can you multitask? Of course you can. Everyone can manage a few things, but can you REALLY multitask?

Most successful people claim they're good at multitasking. If fact, many people would point to skilled multitasking as the key to their very success! I mean, I can watch TV and type blog posts simultaneously, but perhaps that's why it takes me a month to write something here. Hmmm. . .

Society today demands that we juggle multiple distractions. With smart phones we can keep up on our emails, while we're in meetings. And good thing we won't miss any emails while we're at our computers, because the email notification keeps pinging in the background! We're often judged (and rewarded!) at how well we can juggle multiple projects and still get things done.

But if the multitasking Name Game, didn't convince you that juggling makes you less efficient, then why don't you take some time and perform a simple little test. The folks at Open-Site.org have come up with this cool, competitive infographic.

It's time to prove your worth in this multitasking game!

Just click on the box below to start the test. Then brag about your skills in the comments below! Don't worry, there's a practice session . .


The results are in. After fumbling around a bit it turns out that I am. . .

Yes. I am totally average at multitasking. In fact, I'm below average for males. Here's my results for task management: 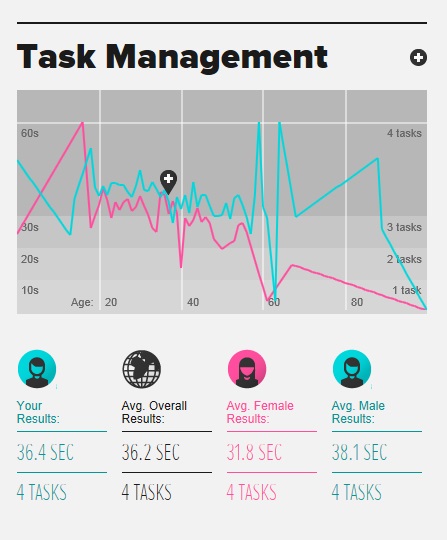 I have to admit, I'm not the best at hitting four keys at a time. I thought I could pull it off by pressing all of the keys simultaneously, but apparently it doesn't take much to miss your stride. A few milliseconds later, and it was all over.

I tried it a few more times and improved my score, but that ruins the fun. No practice runs, means no biased data!

Have at it and let me know your score in the comments!