A poorly run meeting can be a complete waste of time, but a team can accomplish a lot in a well-run meeting. Since we spend a lot of time in meetings, how come there's no training simulation for how to run a meeting?

Well, actually there is! The White Albatross game is an exercise in facilitation. i.e. leading a team!

To be clear, this isn't another team building game, but a storytelling exercise for training kaizen event leaders. I suppose it can be used for general leadership training, as well. The site's a little slim on details, so I pieced together how I think it works from the two documents I found. 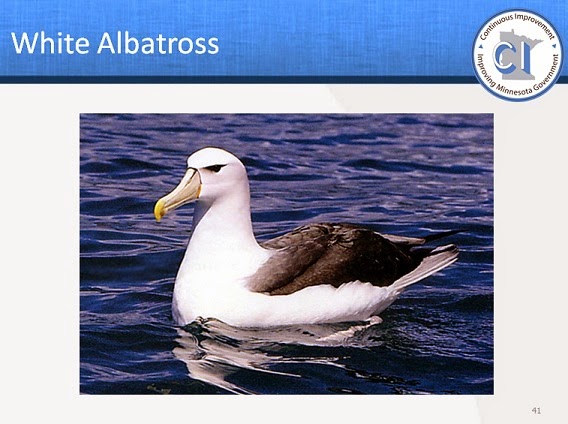 The White Albatross exercise can be found on the government of Minnesota lean site. Currently the material is located here, but occasionally the site is updated and you may need to google to find it.

In order to teach people how to lead a team, each person is supposed to take turns facilitating the group as they complete a mini-project. The project is to answer questions about a story.

The story is a variation of the poem, Rime of the Ancient Mariner, about a scientist and a white albatross. This old sea superstition claims that killing a white albatross will bring bad luck. In the short story, the scientist kills an albatross and bad things happen.

According to the team facilitation slide presentation, you must first complete the questions individually, then stand up and facilitate. This means leading the group through the questions and answers. Since there are only 4 sets of questions (4 rounds), I assume only 4 people can be "trained" at a time. And once the questions are completed, you can't do them again, so this is for small groups only.

It's a simple story, followed by some simple true / false answers. Besides true or false, you can also answer that "the story does not contain sufficient information to respond true or false." And here is where it becomes a little interesting for the facilitator. True or false is easy, until the question becomes a little vague.

One statement says, "The sailors were not disturbed when the scientist violated the old sea superstition."

The story explains that the sailors protested, but the captain granted permission for the scientist to kill the albatross. Were the sailors "disturbed?" It doesn't really say, but their actions would lead you to believe so.

I'm sure we're all been in meetings where the focus has been on the wrong thing, or a side conversation has diverted the whole meeting off track. Some groups could talk for hours about semantics, but a good facilitator will shut down tangential discussion.

That's where this game will shine, by letting the facilitator practice sticking to the questions and key points. Especially in lean kaizen events, we want to focus on the facts and not waste time speculating on what we think something means.

The game also comes with a Powerpoint presentation to help you out with your training. Here's the slide that mentions the White Albatross exercise. 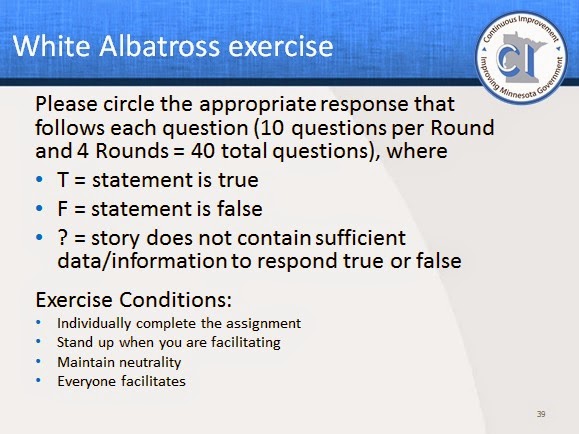 In pop culture, the term "white albatross" refers to a curse, or psychological barrier to overcome. This theme is fitting, because many people find public speaking and facilitation very stressful. The only way to get over this barrier is to just do it. The white albatross game is an excellent way to practice.

I've added the White Albatross game to my list of lean games and simulations.