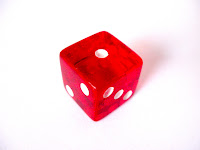 A kanban game where rolling ones wins? Sign me up and take me to the casino.

This kanban game is designed to illustrate kanban as it is used for software development. Posted by jon jagger on scribd.com, it's similar to the other kanban game I reviewed earlier, but appears to have some simplified rules and a few more complicated features.

Now that I'm examining more of these software kanban games, I'm really starting to appreciate the value of kanban in product development. I like how the WIP limits determine where the work needs to be focused and prevents getting too far before the rest is finished. The WIP limits in the kanban game, just as in real kanban, prevent work from being pushed to the next step and encourages the team to focus on the bottleneck before progressing.

I'd be interested in seeing how this works in practice, especially if there are dependencies in the operations, or time constraints and deadlines. I'm more familiar with the gantt chart method of product development, where work steps have a predetermined time and the timeline has to be continually adjusted when things don't go as planned (like an MRP system!).

While I appreciate the summing of the dice to achieve the work value in Christina's kanban game, there's something to be said about the simplicity of just using 1's as work units in the kanban 1's game. I definitely like how the additional features in the kanban 1's game add some meaningful decision making to the game. It's not just dice rolling to demonstrate variation in workflow. Do you use a 1 to split a card or start a new card in the backlog?


The instructional slides are clear and I like the "animated" directions. There's more discussion about this game and it's development on the creator's blog.