A two bin system is a simple kanban replenishment method for inventory control. In a two bin system, component inventory at the process area consists of two bins or boxes. When one bin is emptied, the material handler picks it up and replaces it with a full one, while the operator is using parts from the second bin. A two bin system is simple and most effective with small inexpensive parts that can fit into a single bin.

Some benefits of a two bin system:

The following video on tpslean.com explains how a two bin system works with a flow rack. 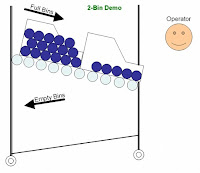 The operator is focused on the value added process, while the flow rack, with the help of gravity, feeds the material to the work cell. The video describes the use of kanban replenishment cards and how a material handler's routing could be set up.

The video uses the term two bin system to describe a flow rack system that could use many multiples of bins, not just two. In fact, using multiple bins allows you to reduce the quantity of parts in a bin and get closer to single piece flow, which is one of the draw backs of a two bin system.

You need to ensure that enough parts are in one bin that it's not emptied by the time the next full bin arrives at the work cell. Some math is required. Time to empty must be greater than the time to replenish the box.

One of the primary benefits of a two bin system is the simplicity. My house is old enough to still have a milk door. Milk delivery was a simple two bin replenishment system. You put your empty bottle out and the milk man would replace it with a full bottle. No empty, no full.

When you start to add multiple kanbans and loops into the system, you may improve your efficiency. You will get closer to one piece flow. You may reduce inventory. You may be better. But you're no longer using a two bin system.

Tps lean has a summary of two bin systems, as well as a great video explanation of OEE to follow up on my last post on OEE.